Play By The Book | Titles as trademarks 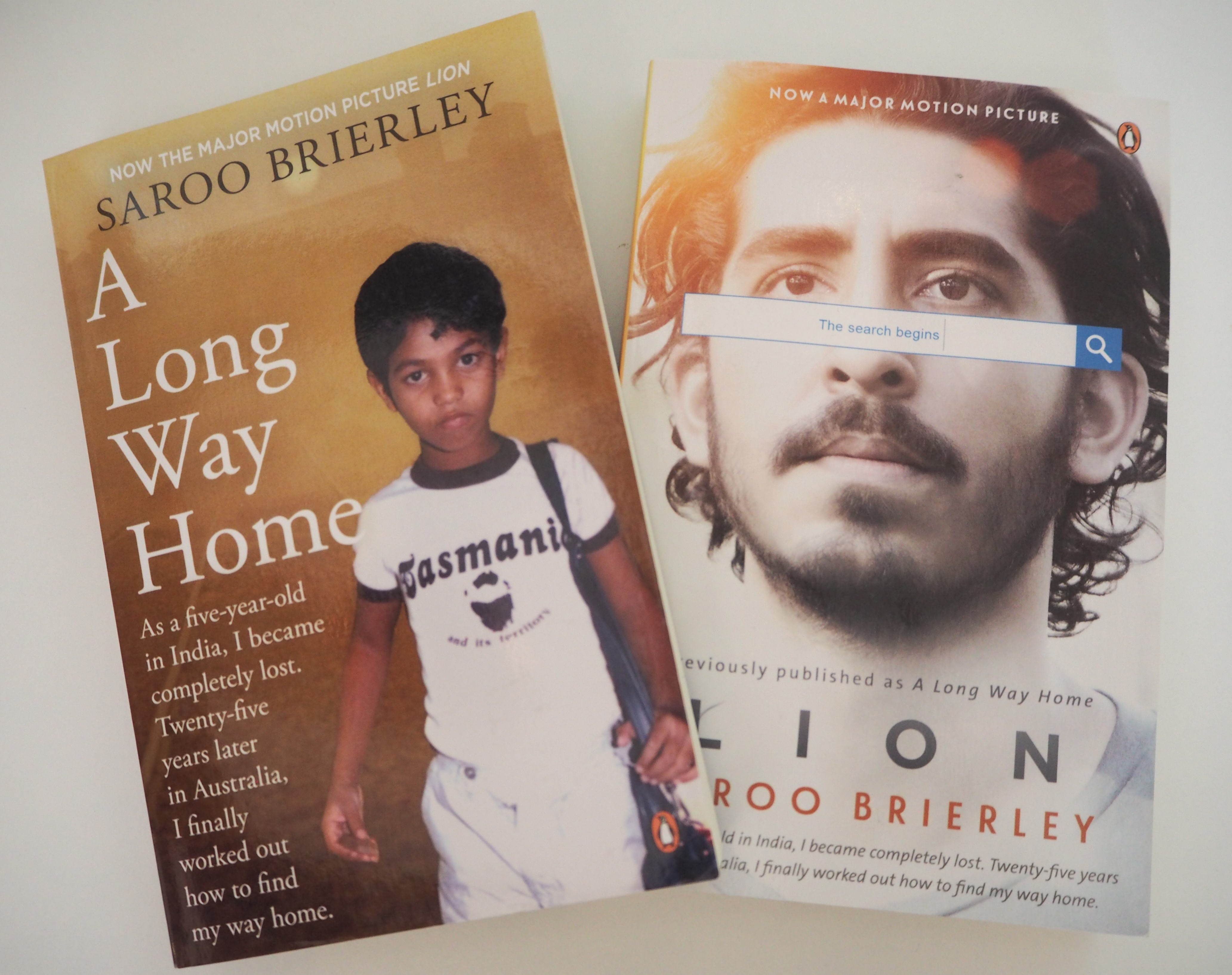 The Indian-born Australian businessman and author was, at age five, accidentally separated from his biological mother. Saroo was adopted by an Australian couple and grew up in Tasmania. Saroo originated as a mispronunciation of his given name, Sheru, meaning “lion” in Hindi.

As an adult, he spent many hours over many months to locate his hometown via satellite images on Google Earth.  Incredibly he was reunited with his biological mother some 25 years after the initial separation. The reunion was extensively covered by Indian and international media.

An autobiographical account of his experiences, A Long Way Home, was published in 2013 in Australia and released internationally in 2014.

Saroo’s memoir was adapted into the 2016 film Lion, which was produced and released by See-Saw Films Pty Ltd (See-Saw) (the parent company of the Opponent). The Lion film which starred Dev Patel and Nicole Kidman was very successful and was nominated for six Academy Awards.

In the commercialisation of his memoir Saroo Brierley had kept movie rights and theatrical rights separate and sought to commercialise them separately.  He ultimately granted the Opponent / See-Saw an option in relation to stage rights.

On 5 October 2017,the Applicant filed an application to register the trade mark LION in relation to the following services:

The Opponent opposed the application on the following opposition grounds under the Trade Marks Act, 1995 (Cth) (the Act):

a.    Section 58 - Applicant not the owner of the trade mark

b.    Section 60 – Similar to trade mark that has acquired a reputation in Australia

Pivotal Issue – name of a film as a trade mark

In the recent Australian Trade Marks Office decision Long Way Home Holdings Pty Ltd v Saroo Brierly Enterprises Pty Ltd [2020] ATMO 109 (23 June 2020) the Hearing Officer found that the pivotal issue in this opposition is whether the title of a film fits within the statutory definition of a trade mark (section 17 of the Act), that is, whether it is a ‘sign’ used to distinguish goods or services:

In assessing this issue the Hearing Officer considered a European decision relating to the title Dr No in the James Bond series to be highly relevant.

In DanjaqLLC v OHIM T-435/05 30 June 2009 the Court of First Instance (CFI) upheld a decision of the Board of Appeal of Office of Harmonization for the Internal Market (OHIM) that a film title is an indicator of artistic, but not commercial, origin and, assuch, is not a trade mark.

In that case, German Mission Productions Gesellschaft für Film-, Fernseh- und Veranstaltungsproduktion GmbH sought to register the word mark DR. NO for various goods, among them recording discs,vehicles, luggage, clothing and beer.  US company Danjaq LLC (Danjaq) (which owns the intellectual property associated with James Bond) opposed based on the allegedly well-known mark Dr.NO and rights in the unregistered mark Dr. NO.

The CFI found that Danjaq had not established use of Dr NO as a trade mark in promoting the first James Bond film “Dr. No”.

In the LION opposition, the Hearing Officer followed this approach and found that although the LION film was very successful, the Opponent’s evidence did not establish that LION was used as a trade mark.  Rather, LION was simply a reference to the film.

This finding, that the Opponent did not establish that it had used LION as a trade mark, proved fatal for the section 58 and 60 opposition grounds.

The finding also impacted on the section 42 ground (contrary to law) because the Hearing Officer was not satisfied that the sign LION, as used as the title of the film, is associated with the Opponent.  Consequently the sign was unlikely to be seen as an indicator of trade source.  The Hearing Officer found that use of the LION trade mark by the Applicant is unlikely to be contrary to the Australian Consumer Law.

Similarly, in relation to passing off, the Hearing Officer was not satisfied that the Opponent had established goodwill or reputation such that there is an association in the mind of the purchasing public.  In fact, the Hearing Officer found that if there is an association in the minds of the public between the title of the film Lion and an entity, that entity seems likely to be Saroo Brierly.

Application not made in bad faith

The ground based on section 62A is pleaded in the Statement of Grounds & Particulars as follows:

The Opponent in its evidence claimed that the trade mark application had been filed to provide the Applicant with additional leverage during commercial negotiations. Further, it was alleged that Mr Brierley seeks actually to mislead consumers.

The Hearing Officer rejected this:

I am far from persuaded by the Opponent’s submissions or its evidence. Mr Brierley has an interesting life story. That story was turned into a book—Mr Brierley’s memoir. Mr Brierley has rights in the story contained in that book which he may choose to licence to others, or not, as he sees fit. Mr Brierley chose to grant rights to See-Saw to produce a film based on the story in his story. A film was made and was entitled LION— this is not some random title but the meaning of a phonetic equivalent of his first name. Whether Mr Brierley decided on that title for the film or was happy with that title or not is of little import here. Mr Brierley was approached by See-Saw to produce a stage show based on his memoir. That Mr Brierley might have seen monetary value in a trade mark and/or sought, through the Applicant, to improve his bargaining position in negotiations in respect of rights he owns by applying to register LION as a trade mark seems a natural approach, rather than behaviour which is likely to be seen as unscrupulous, underhand or unconscientious in character by persons adopting proper standards. This is especially so in the light of my finding that the Opponent has, at no time, used LION as a trade mark.

In light of the findings above, the Opposition was rejected and the LION trade mark application was allowed to proceed to registration in relation theatre productions and musical and stage performances.

Superficially titles seem like trade marks.  They are often well known and assist consumer search and purchase.  However, whether a title is actually used as a trade mark, is an important threshold issue in registration,opposition and infringement matters.

There are few decisions on the issue in Australia.

The issue of an already well-known story in conjunction with a trade mark and film title was considered in relation to infringement in Christodoulou v Disney Enterprises Inc & Ors [2005] FCA1401.  An interesting feature of this case is that the movie provider and distributors were sued for trade mark infringement in connection with the distribution and sale of their own film.

The registered trade mark owner, Mr Christodoulou, was a Melbourne-based writer and composer who is also involved in a business of providing, among other things, live entertainment booking services. He owned Registered Australian Trade Mark THE HUNCHBACK OF NOTRE DAME’, which is registered for ‘entertainment services in class 41’.

The Federal Court found that none of the allegedly infringing uses of the movie title amounted to use of that title as a trade mark by the respondents.  A recognised title of an adaptation or cartoon version of a well-known story is descriptive. The descriptive meaning of these words was established well before Mr Christodoulou filed his trademark.  The Federal Court observed that the claim appeared to be an attempt to obtain a monopoly over words used to describe a lawful product.

However, titles can and do operate as trade marks, especially where the work is serialized, such as a television series, stage shows, a film series with merchandise or the title to periodically issued publications.

In fact, if properly managed,brand and trade mark rights may be the significant source of revenue in the commercialisation of creative works.  Strategic trade mark filings should be considered in conjunction with a clear strategy to ensure that use of the title, constitutes trade mark use.